Wherever there is trouble in Europe, wherever rumours of war circulate and men’s minds are distraught with fear of change and calamity, you may be sure that a hooked-nosed Rothschild is at his games somewhere near the region of the disturbances.

No this isn’t Jeremy Corbyn, nor is it one of the Labour Party’s unsubtle Jewish detractors. Rather, it is Keir Hardie, Labour’s first Member of Parliament (MP), writing in his Labour Leader paper of 1891.

Over a century later, one would think that Labour’s current leader has revived such uncouth sentiment, with Mr Corbyn’s handling of the current anti-semitism debate threatening to tear apart the British Left.

Indeed, the fact that the party’s National Executive Committee has been forced to convene to adopt the International Holocaust Remembrance Alliance’s full definition of what anti-semitism actually means, demonstrates the mess Corbyn has made of the situation.

If he had acted more vehemently in response to Naz Shah and Ken Livingstone’s foolish comments, it is unlikely this melodrama would have occurred, and the Conservative Party would not be enjoying a surprise respite amidst its own Brexit troubles.

Much of the early Labour Party antipathy towards the Jews was a result of its members socialist, anti-capitalist worldview. With Jewish people seemingly occupying a disproportionately high number of prominent positions within global political and financial institutions at the end of the 19th century, they were readily associated with the degradation of the proletariat.

“Jew moneylenders now control every Foreign Office in Europe” sniped the Social Democratic Federation’s (SDF) Justice paper in 1884. Labour leaders even saw the Boer War as a conspiracy of the Jews to grab the gold fields of South Africa.

Of course, some of this vitriol was consistent with views prevailing more broadly across society at the time. This does not excuse them, it is simply a reality. Today, with the history of Jewish persecution in the 20th century impossible to escape, one must tread much more carefully.

Anti-semitism undoubtedly still exists among many segments of society, although to what extent is hard to gauge. With Israel linking almost every conceivable issue to religion and race – burnished by a right-wing government intent on destroying the two-state solution – it is easy to gain an impression that anti-semitic fervour is on the rise.

Corbyn has not helped himself with careless past comments in support of militant Palestinian groups – not to mention others around the world – and his unwillingness to draw a line under the anti-semitism row sooner makes any move or remark on his part now seem disingenuous.

At least this latest episode in his checkered political career will allow him to draw a parallel with Hardie, the darling of Labour socialism, however much he may want it to disappear.

The Cornish landscape is strewn with reminders of its industrial – not to mention industrious – past, a throwback to the ‘good old days’ of British ingenuity and invention.

Long disused chimney stacks stand sentinel above the wind-battered coastlines, their silent reverie eerie yet captivating. Ramblers and dog-walkers step over concrete plinths and rubble-strewn compounds, the bricks stamped with the emblems of manufacturers long since liquidated.

On a recent visit to the Southwest I visited one of the better-preserved bastions of Cornwall’s industrial archaeology. The Levant Mine at Pendeen is managed by the National Trust and provides a snapshot of a long-forgotten era in British history. It was an era of exploration and extraction, of daring commercial ventures and technical gambles, of wondrous profit and devastating loss.

‘The mine beneath the sea’ as it came to be known, Levant opened in 1820 as a copper concern. Located on a remote, windswept headland, one can only imagine the conditions working at the surface, let alone down in the murky depths.

By the 1850s tin had become the major preoccupation, with tunnels reaching out more than 1.5km into the sea, an incredible feat of engineering given the relatively primitive technology of the day.

Hoisted to the surface by beam engine, the mined materials were then transported by an internal tramway system to the dressing floors where the valuable ores were separated from the worthless rockface by women and children.

Not satisfied with manpower alone, dedicated pit ponies were hoisted down the shafts tail first where they were fed and stabled for up to three-year periods without seeing daylight. Their ability to lug wagons full of ore from beneath the sea bed to the foot of the shafts was invaluable, though how happy the poor beasts were in their subterranean netherworld is another matter. 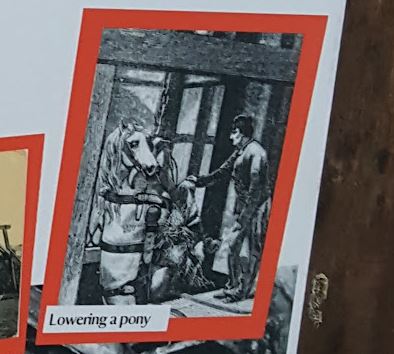 Either way, Levant remained one of Cornwall’s most productive mines throughout the rest of the 19th century and it only closed in 1930 when further extraction became uneconomical.

Today such enterprises draw scorn (particularly in the Western world), the environmental, financial and political costs often considered too great for an idea of merit to be pursued.  This is not to advocate a resurrection of the British mining industry but the regulations surrounding the exploitation of natural resources dissuades the type of ingenuity embodied by the Levant Mine.

This is particularly important when it comes to energy security.

With our staple energy reserves of oil and coal fast depleting, a renewed mistrust in nuclear power after Fukushima, and a contested environmental debate regarding fracking, where is the spark of tomorrow to come from?

Renewable energy is seen as the great hope, a relatively uncontroversial and inherently safe source, though heavily reliant on the unpredictable elements. Solar and wind farms will continue to spring up, their dull, sanitised designs unable to hide the flaws in the policies behind their propagation.

What of human ingenuity? What of the great engineering discoveries of the future? Doubtless we are capable of ever deeper oil extraction, of drilling into the earth’s core to harness geothermal energy, of converting disused quarries into pumped storage facilities. But who is backing our engineers, our geologists, our scientists?

The private sector can only do so much, and companies investing in the power of tomorrow are often put off by a lack of governmental support or initiative. The political concerns of the few – whether it be a need to appease environmental groups or vote-winning constituencies – tend to outweigh the needs of the majority.

This is not the 19th century and, to be honest, that’s a good thing. But the overregulated, intellectually and technologically stifling climate of the 21st century certainly has its pitfalls.

You will not get another Levant Mine, especially not in the UK. At least as a monument, it stands as a reminder of what we have sacrificed in the name of inclusivity, consensus and caution.

Gone are the days when people, and companies, could just do things.