Hindsight is a wonderful thing, as the saying goes. Decisions that at the time looked logical and progressive now appear irrational and ridiculous. As debate rages over the merits and demerits of High Speed Two (HS2), as the government is forced to take control of a flagging rail franchise, and the North-South divide appears greater than ever, the so-called ‘Beeching cuts’ of the 1960s look increasingly short-sighted.

Despite inventing the locomotive and pioneering railway development, by the middle of the 20th century many of Britain’s tracks were in poor condition, lines were being underused and the motor car was fast becoming an affordable commodity. Motorways and A-roads made moving freight by lorry efficient and cost effective. Railways were increasingly seen as expensive and unnecessary and some rationalisation of the system was deemed essential.

Richard Beeching was chairman of the state-owned British Railways, and in two reports in 1963 and 1965 he advocated axing more than 50% of stations and over a third of route miles on the UK railway network. Virtually all of his recommendations were carried through. Yet the hasty implementation of Beeching’s plans ensured that there was no experimentation period, with land effectively abandoned and left in ruin for perpetuity.

As car traffic grew at a frighteningly quick pace and the population consistently expanded, Britain’s road network began to show signs of pressure. Simultaneously, new housing estates on the edges of cities, in suburbs or once small villages that had previously had railway stations now went unserved. Buses were in some cases a viable alternative, although they further contributed to the clogging of the highways that has become a persistent feature of the early 21st century.

It is therefore with no little irony that the government has unveiled a £500m fund to restore historic railway lines that disappeared on Beeching’s recommendations just over half-a-century ago.

Of course this sum pales into insignificance when compared to the tens of billions of pounds likely to be spent on HS2 or Crossrail. Not only that, but many of the old lines will take considerable effort to revive, others have been built over, whilst others still now run adjacent to housing estates. Imagine buying a home next to a disused railway only to find out that it will soon be plied by screeching trains once again.

The reality is that Britain needs major new infrastructure schemes like HS2 to better connect the major cities of the Midlands, North and Scotland with London. However, it also requires the re-opening of as many of the Beeching lines as possible to further connect more provincial areas of the country with these major cities. This will necessitate considerable heartache for residents and landowners in the path of such networks, not to mention the environmental damage it will cause.

Time has proven that the Beeching cuts were a folly and that they have undermined the modern British transport system. Undoubtedly the intentions were noble ones aimed at eradicating inefficiency and waste. But the swift implementation of changes ensured that the long-term consequences would be devastating, provoking the conundrum the UK faces today. 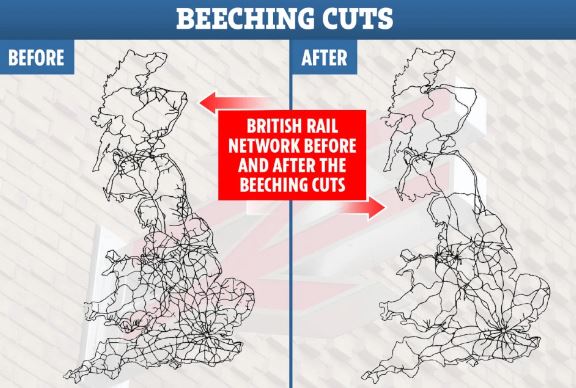 It will take an extortionate amount of money and political capital to see through the radical upgrades now necessary to modernise the British transport system. What else citizens and businesses are willing to sacrifice in order to get there should be the subject of lengthy expert analysis and public consultation.

No churns, no porter, no cat on a seat
At Chorlton-cum-Hardy or Chester-le-Street
We won”t be meeting again
On the slow train

At the moment, the train – be it slow or high speed – has barely left the depot.

An interested observer of current affairs, researcher and writer View all posts by Stefan Lang